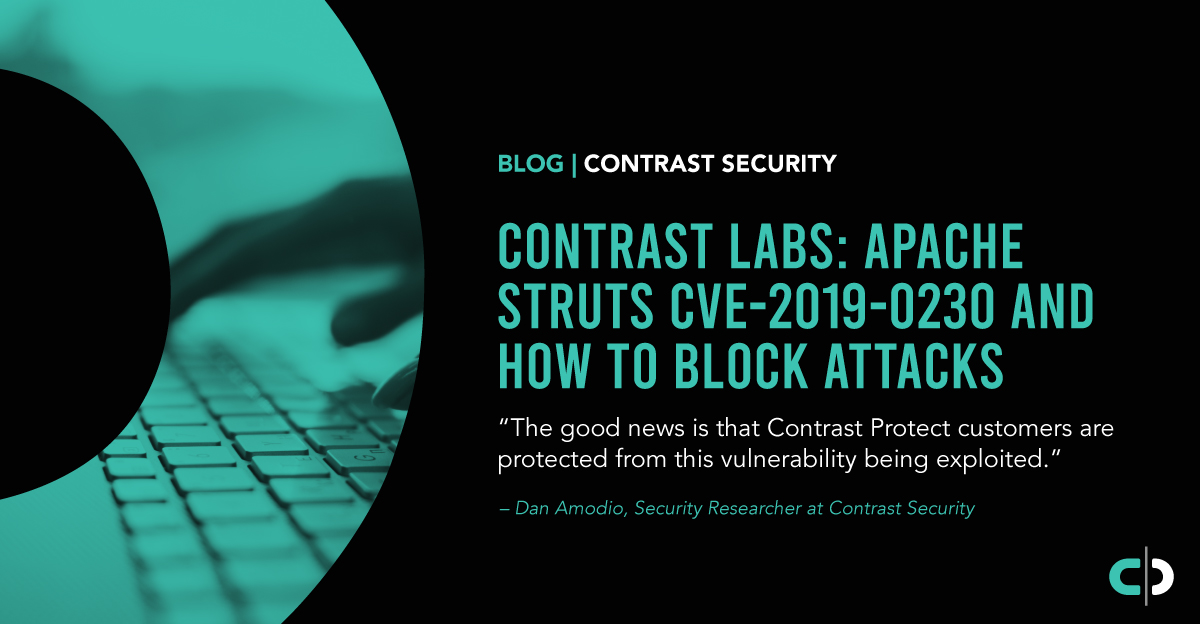 Note: Special thanks to Alvaro Muñoz (https://twitter.com/pwntester) for correcting us on some very important technical facts in our original copy of this blog.

On August 13, 2020, Apache published a security bulletin that addressed a couple of application vulnerabilities in Struts 2, which included CVE-2019-0230. At the same time, proof-of-concept (POC) exploit code was released on GitHub. CVE-2019-0230 is a forced double Object-Graph Navigation Language (OGNL) evaluation vulnerability that potentially allows an attacker to run arbitrary commands on a remote server. Being able to upload files is required in order to exploit the vulnerability. Struts versions 2.0.0 through 2.5.20 are affected. Contrast Labs was able to reproduce the POC and confirm that our latest Java agent (3.7.7.16256) will block the attack.

The good news is that Contrast Protect customers are protected from this vulnerability being exploited.

To confirm the vulnerability, Contrast Labs utilized the POC code from GitHub on Tomcat 7.0.99. The exploit relies on crafting an OGNL payload into a Struts action field that is subsequently rendered into the id attribute of a Struts a tag.

An example payload HTTP request body is provided below:

How to Confirm That the CVE Has Been Fixed

Readers will notice that it was much different than when the exploit was successful. We noticed very quickly that the calculator application was not run. Finally, we browsed to the Contrast Protect UI and saw the detected and blocked attack:

Contrast customers are actively protected from this exploit if Contrast Protect is enabled, and blocking mode is enabled for Expression Language and OGNL Injection. If monitoring mode is enabled, the attack will be detected but not blocked. Applications should be upgraded to 2.5.22 to address the vulnerable code.

To enable the block mode on OGNL Injection, users need to navigate in the Contrast Protect user interface to “Policy Management” -> “Protect Rules” -> “OGNL Injection.” At that point, users need to verify the environment running their vulnerable instance is in “block” mode.

For readers seeking more information on the Apache Struts OGNL vulnerability, the following links are useful:

Readers without Contrast Protect can get more information by downloading a copy of our solution brief, “Contrast Protect with Runtime Application Self-Protection (RASP).”

WHY OBSERVABILITY IS THE NEXT BIG THING IN SECURITY