Microsoft Chairman John Thompson spent a decade at the helm of security software developer Symantec. Since he stepped down in 2009, cyberthreats have gotten significantly more sophisticated and pervasive, which helps explain his latest bet. 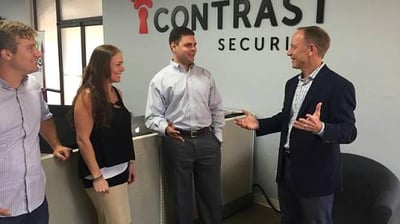 Contrast Security, a Silicon Valley start-up whose software protects applications from attack, said Wednesday that Thompson joined a $16 million investment in the company. The deal was led by venture firm General Catalyst Partners.

Founded in 2014, Contrast was designed for a new era of software development. All types of companies — banks, retailers, automakers — now employ developers who are writing code, sharing it with co-workers, and pushing it to any number of devices and servers. Every step of the way that code can be corrupted by hackers.

Contrast Assess is deployed at the beginning stages of software development to keep the bad guys out throughout the whole process. On the other side, the start-up's products can be used by companies that are constantly using new apps and programs, which all need to be vetted and monitored to make sure they don't contain malicious code.

Christine’s wide breadth of marketing experience has been focused on driving revenue, building brand recognition, and creating demand-generation programs in technology organizations. For the past 11 years, her deep understanding of marketing principles, coupled with forward thinking, has been instrumental in transforming application security start-ups into successful, profitable companies.
previous post
The VAR Guy: When It Comes to Cybersecurity, Both Candidates Disappoint
next post
So, Now We Have a Federal CISO...