As software eats the world, the world faces a software security crisis. The movement to modern software such as cloud technologies and microservice architectures is essential to innovate quickly. Yet, nearly three in four developers say that security slows down Agile and DevOps.

Neither developers nor security teams are to blame. DevOps speed is held back by a 15-year-old, scan-based application security (AppSec) model designed for the early 2000s. Traditional security tools cannot keep up with today’s rapid development pace or modern application portfolio scale. However, sacrificing security for development speed places critical and confidential personal and business information at risk—from financial to healthcare data—and can disrupt operations or even cause outages.

Traditional AppSec models that depend on static application security testing (SAST) or dynamic application security testing (DAST) are plagued by development delays and highly inaccurate results. Scans take many hours, if not days—not ideal timelines for agile teams that ship code multiple times a day. Imagine a server bug on an e-commerce platform serving millions of customers; the company will lose thousands of dollars every second the bug remains. Teams simply cannot wait for these security scans to complete. Moreover, once they do complete, the security results naively, yet unintentionally, cause more harm than good.

Inaccurate findings take the form of false positives and false negatives. These are foundational weaknesses of code scanners because they waste developers’ critical time on security problems that actually do not even exist. Code scanners cannot tell the difference between false positives and true positives because they are “blind” to the runtime context of applications, such as the entirety of data and control flows, internal logic, configuration and architecture, presentation view, libraries and frameworks, and application server. The runtime context, which escapes code scanners, contains the critical pieces of information required to differentiate false positives from the vulnerabilities that are real.

Rather than focusing on time-consuming and frustrating security bottlenecks and interruptions to writing code, developers can focus on creating innovative and secure applications. Contrast eliminates code scanning and the resulting bombardment of security alerts from false-positive vulnerabilities. Security instrumentation is an excellent fit for modern software and DevOps because it is scalable. Functional tests now also serve as security tests, replacing expensive security experts with developer-friendly security products and development delays with accelerated time-to-market timelines.

Think about that. The three foundational use cases of a modern application security program are supported in a single platform—the Contrast DevOps-Native AppSec Platform. Developers can sign up for a free account, access the entire platform, and secure their application within an hour.

The main limitation with Community Edition is that developers can only instrument and secure one Java or .NET Core application. Also, broader programming language support and some enterprise features such as role-based access control (RBAC) and packaged reporting are reserved for paid users.

Developers can hit the ground running with Contrast Community Edition, integrating AppSec directly into the modern DevOps tools they already use. Using the flexibility and extensibility of the Contrast DevOps-Native AppSec Platform, developers can deploy Community Edition onto one of several Platform-as-a-Service (PaaS) clouds of choice. They can be the first to know about newly discovered vulnerabilities through chat tools, add security gates to continuous integration/continuous deployment (CI/CD) pipelines, track remediation through ticketing systems. Most importantly, developers can learn about remediation options in integrated development environments (IDEs) and code editors.

The following screenshots depict core capabilities in Community Edition and intend to help developers gain greater familiarity with the product and its introductory user interfaces.

Home Screen. A single view of the security posture of a user’s entire application portfolio. Developers receive a single letter grade that indicates the general health of their portfolio as well as security scores for custom code and library usage. They also can learn about remediation metrics, vulnerability status breakdowns, and attack history. 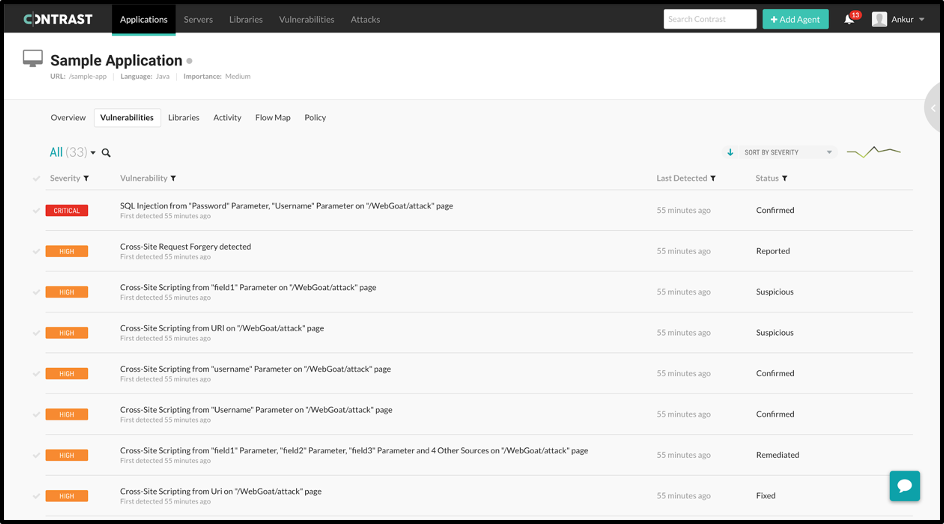 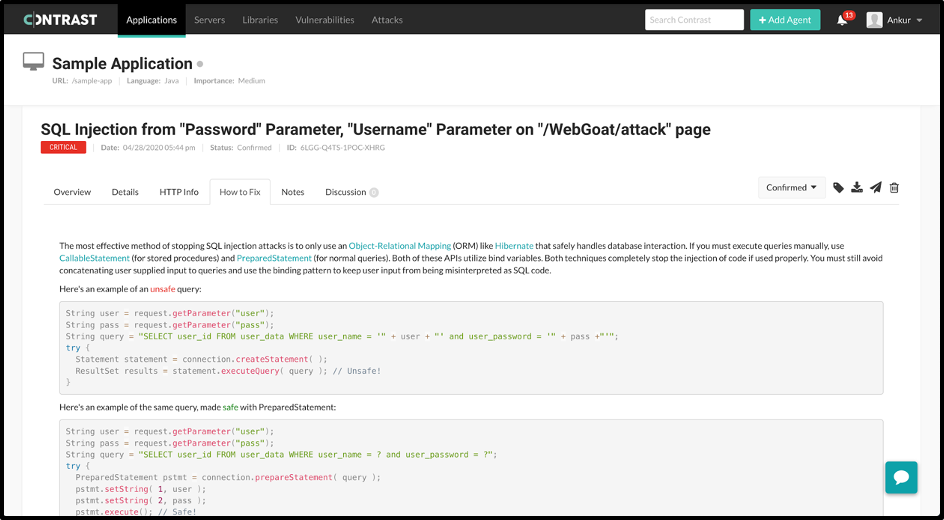 Vulnerability View. Get unprecedented access to detailed information about any vulnerabilities found in custom-source code during application runtime. Learn about what exactly was found, understand the security risk, track the data flow, or even replay the HTTP request. Most importantly, obtain clear and actionable remediation guidance.

Open Source View. Drill down into a specific application’s security posture by viewing a list of all open-source and third-party libraries used by the application. Filterable by severity and status, the list gives letter grades indicating the safety of that library while communicating the number of library classes instantiated and the latest library version to which the developer needs to upgrade to reduce security risk.

Attack View. Monitor attacks against the application while learning about the attacker’s IP address, the vulnerability exploited, and attack timelines. Use Contrast Protect to automatically block and prevent these attacks, both known and unknown (zero-day), from succeeding either at the perimeter of the application or just before the malicious action is taken from within the application.

Get the Power of Innovative, Accurate AppSec

Traditional application security tools such as code scanners cannot keep up with today’s rapid pace of application development, which is the cornerstone of innovating quickly. Contrast Community Edition democratizes AppSec, enabling DevOps to accelerate to the speed of the business through security instrumentation. Developers can gain first-hand experience by signing up for Community Edition today. Get a free account today and start to write secure code faster.

Ankur leads several products at Contrast Security across developer tooling integrations and Community Edition. A highly analytical and empathetic product leader, he blends subject-matter expertise with business acumen to drive cross-functional alignment and deliver meaningful user experiences. Ankur has a track record of success in product at high-growth startups such as cloud security unicorn Netskope and national organization he co-founded, Product Space. He holds a Bachelor of Science in Computer Science from the University of California, Los Angeles.

What It Takes to Be Named One of Inc. Magazine’s Best Workplaces in 2020