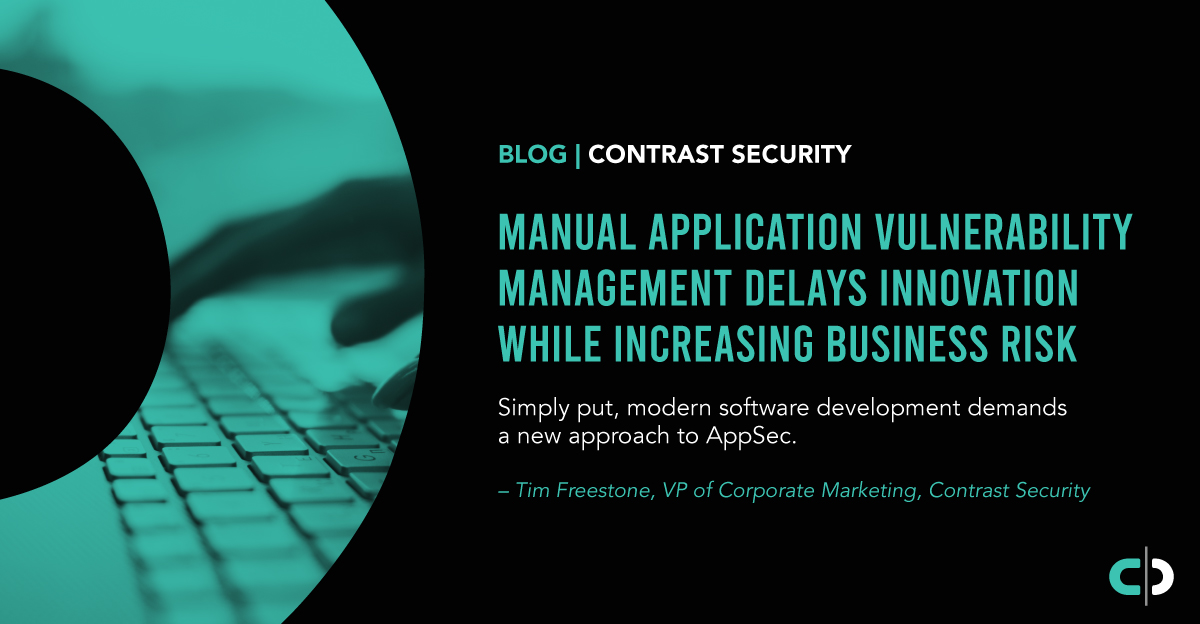 Development and security teams are frequently at odds. On one side, developers focus on code commits, release dates, and timelines. Their performance metrics are based upon getting a product out the door—on schedule and on budget. On the other hand, security teams are most concerned with preventing cybersecurity risks to the organization and ensuring they maintain compliance with applicable regulations.

Many organizations struggle to bridge the gap between these juxtaposed positions. 68% of organizations have a mandate from the CEO that nothing should slow down development. Aa a result, developers are under increasing pressure to shorten their release cycles and commit more code faster. Indeed, 52% of companies admit to cutting back on security measures to meet business deadlines.

The conflict between security and development teams creates significant security risks for an organization. If security impedes development, security testing may be performed in a haphazard manner. In some cases, developers may be under so much time pressure that they will skip application security testing altogether.

A successful application security (AppSec) program is contingent on effective vulnerability management. But legacy AppSec approaches fail in this regard. Following is a quick look at some of the reasons this is the case.

SAST and DAST are two very different approaches to application security testing. Legacy SAST takes a “white-box,” or signature-based, approach to testing, whereas DAST employs “black-box” testing that sends HTTP requests containing attacks and then checks responses to determine if the attack worked.

The challenge for SAST tools is that their constructed threat model is simply a guess at what vulnerabilities may exist within the respective application. The problem is static scanners focus on lines of code and attempt to piece together how the application runs and the data flows work. But it is impossible for them to trace the complex maze of program execution, state management, validation, encoding, and other programming idioms. The result is a list of vulnerabilities that are never exercised in runtime (or false positives).

When it comes to API security, the challenges are even greater. Static scanning is trained to look for standard “source” methods and to trace the program through. However, APIs use custom methods to read a JSON or XML document from the body of the HTTP request, parse it, and pass the data into the API. With every framework performing these tasks differently, it is impossible for a static tool to analyze the data flow—which results in false negatives. Open-source frameworks and libraries are just as problematic. Open source contains custom library functions that only custom rules can detect. As static scanning tools do not have visibility into the code, they are unaware of the risk.

52% of companies admit to cutting back on security measures to meet business deadlines.

DAST is a “black-box” testing model that sends HTTP requests containing attacks and checks responses to determine if the attack worked. While sometimes the responses are definitive, often the evidence is unclear—if there was a successful exploitation or if the application simply broke. API security is even more difficult, as there is no way for a DAST to know how to generate well-formed requests. Additionally, it is exceptionally difficult to provide the right data to automatically invoke an API correctly due to many applications using custom, nonstandard protocols, and data structures for their APIs. This translates into numerous false positives as well as false negatives.

43% of organizations cite API security as a serious concern

False positives and false negatives are very different, but they both result in wasted time for an organization, especially the development team. Each false positive that a static or dynamic scanning solution generates must be manually investigated and remediated by developers, delaying code commits and slowing release cycles.

False positives can consume an immense amount of time diagnosing. Research shows that around one-quarter of all security alerts are false positives. Per one report, each takes an estimated 164 minutes to remediate—and this is when the application is still in the stages of early development. These can quickly tally into substantial time expenditures that slow code commits and development cycles.

Compared to false positives, the impact of false negatives comes later when a detected vulnerability in production code forces costly patch development and incident response activities addressing breaches caused by exploitation of these vulnerabilities. Almost half of organizations have had an incident caused by an unpatched vulnerability.

Half of organizations indicate they have had a security incident caused by an unpatched vulnerability.

While legacy SAST and DAST can help to identify vulnerabilities in code, this is only part of vulnerability management. Once a vulnerability has been identified, it needs to be remediated and undergo additional testing to ensure that the fix has occurred and the changes have not created a new vulnerability or impacted application functionality.

When vulnerabilities are missed and code is released into production runtime, organizations are put at risk. Successful exploitation of vulnerabilities can harm organizations in multiple ways. A compromised application can result in serious data exfiltration with myriad implications. For example, exposure of personally identifiable information (PII) that incurs significant fines and penalties from the corresponding regulatory bodies charged with enforcement of the European Union’s General Data Protection Regulation (GDPR), the Payment Card Industry Data Security Standard (PCI DSS), the California Consumer Privacy Act (CCPA), among others. Each of these also comes with mandatory public communications that can create substantial harm to an organization’s brand.

Of course, a data breach is not the only possible result of a successful exploitation of an application vulnerability. In some instances, bad actors seek to disrupt operations, shut them down, or even use them for nefarious means. Consider the buffer overflow vulnerability in the messaging application WhatsApp, which was weaponized by the NSO Group, an organization specializing in exploit development. The exploited code was sold to governments for extra-legal monitoring of dissenters and other persons of interest.

In other instances, an exploited vulnerability can generate significant losses in operational productivity and even revenue. The magnitude of these types of attacks becomes even greater when the target is an application used to manage operational technology (OT). The impact here can extend to public health and safety.

Vulnerability management is a serious undertaking when it comes to AppSec. Legacy AppSec approaches take an outside-in approach that lacks the accuracy and velocity required by modern software. Security certainly cannot be compromised to satisfy these requirements. But at the same time, business acceleration is a mandate from the C-suite and board of directors. This puts security teams and developers at an impasse.

A paradigm shift in AppSec is required, one that takes an inside-out approach to securing applications—in development and in production. Using instrumentation to embed AppSec within software automates vulnerability identification as well as remediation verification. This eliminates both false positives and false negatives, unleashing developers to focus on the outcomes on which they are measured, while empowering security teams to demonstrate applications are free of vulnerabilities and protected.

To learn more about the challenges of vulnerabilities, download a copy of our eBook, “How Manual Application Vulnerability Management Delays Innovation and Increases Business Risk.” 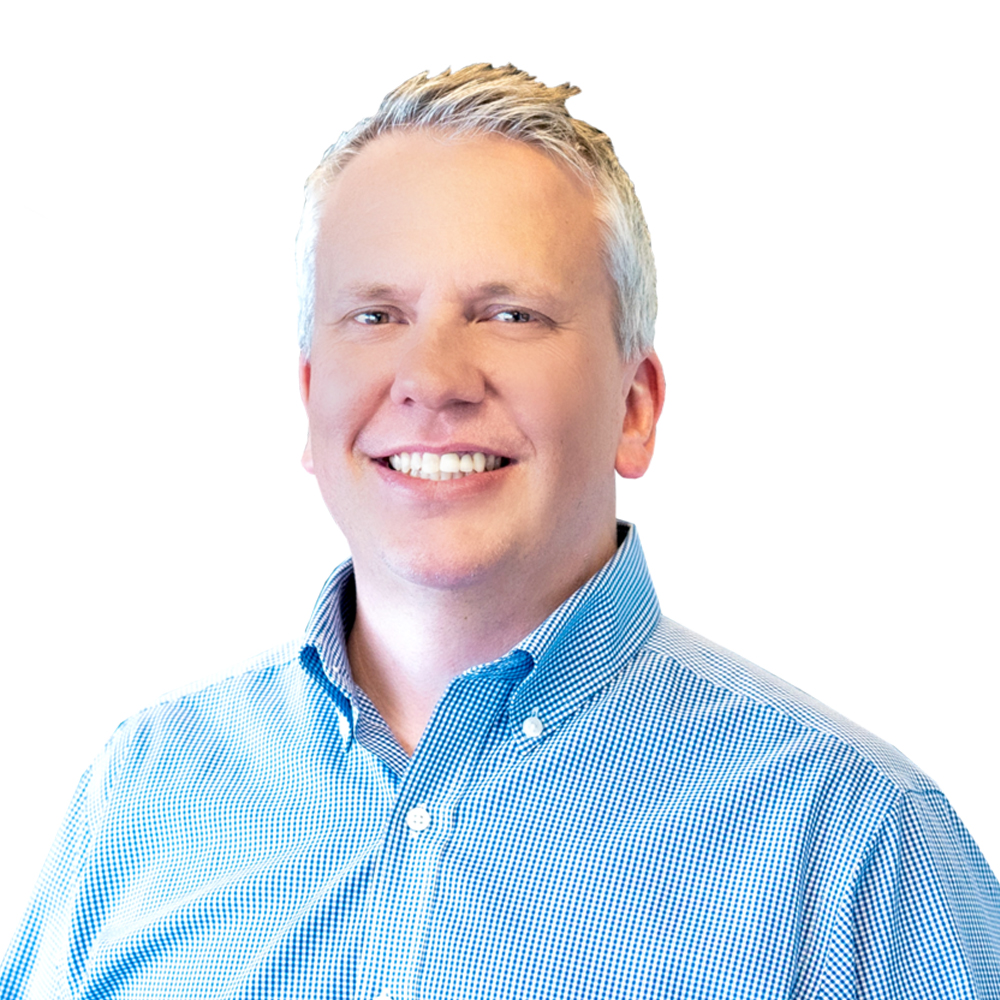 Tim leads the Corporate Marketing organization at Contrast, which includes Creative Services, Operations, Field, Channel, Growth, Communications, PR, and Customer Marketing across North America, EMEA, and APJ. Before Contrast, Tim led a high-performing team at Fortinet charged with brand, content, and demand-gen/growth marketing. Previous to Fortinet, Tim built out demand-gen operations for NetApp in the Americas and then globally. He cut his teeth in the tech space in New York where he was a founding partner in a technology marketing services agency that grew to over 50 employees with no external investment.