How to Secure Jenkins Pipelines without the hassle 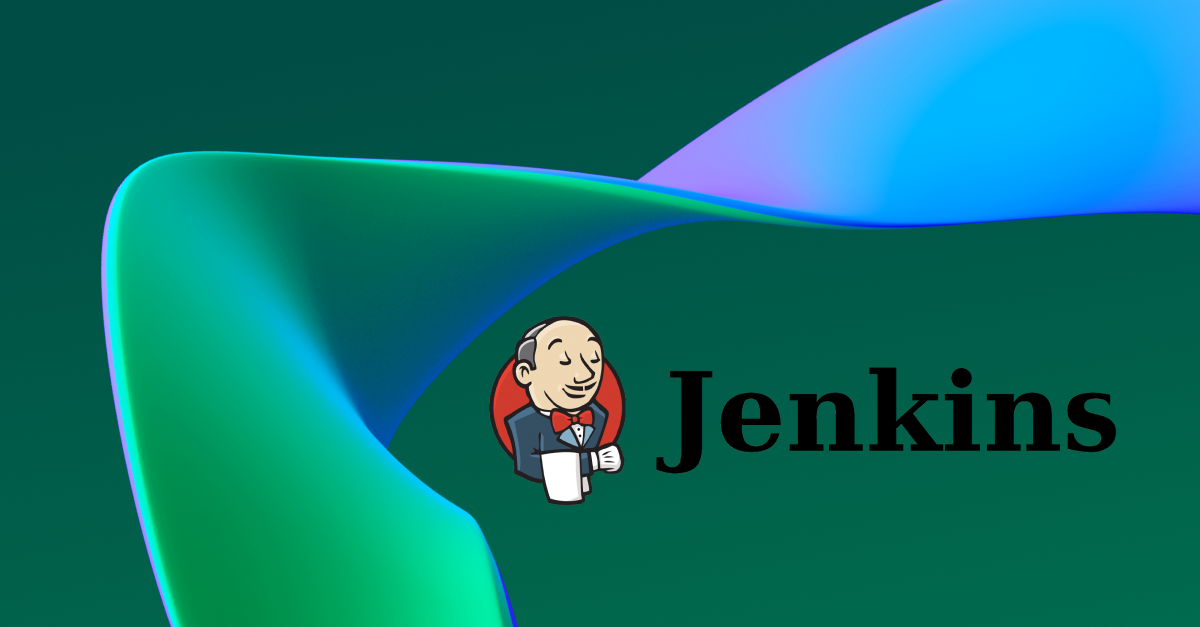 Organizations spend countless hours and resources trying to effectively incorporate application security into their software development environments. Difficulty deploying and scaling security within modern development pipelines causes friction among teams throughout the software development life cycle (SDLC). Manual processes and workarounds have plagued the security landscape for decades. The need for constant scanning slows down release cycles and increases developer inefficiencies. And at the same time, 79% of organizations report that developers are under increasing pressure to shorten release cycles.

So the question remains, why are companies so adamant about including security into their value streams?

Security is essential at every layer of the software stack. Until recently, application security has been implemented at the peripheries to ensure that threats had no way to get into an application. The idea here being that if an attacker cannot gain access into an application using a peripheral control (such as an exposed network port), there is little damage that can be done to compromise the application and its users. This makes sense until you look at how the software stack actually works to deliver a product to a user.

Take a look at a simple web application below with the example of safeguarding networking ports.

Because ports are exposed to users, users are able to interact with the application. Information is passed between these ports so the application can respond with the desired output.

With a traditional application security model, teams would work together to ensure that all the necessary network ports are configured correctly to allow only connections that are deemed safe and secure. For these purposes, let’s say that “Port 8080” is a safe port and the only one to which an outside user has access.

From a networking perspective, there is only one way in and one way out. The team has successfully contained the application. Compliance reports and audits all point back to policies/rules created to ensure all the port networking components are mapped to their specified frameworks.

But what about the application layer itself? This approach to security doesn’t prevent attacks via methods such as SQL injection—where an attacker can hijack a session and pass a string (such as “or 1=1” added to a functioning query string), which enables malicious side effects within the application.

And what about modern application development using DevOps practices and the cloud? Today, software stacks plug into automated continuous integration/continuous delivery (CI/CD) pipelines that remove the usual overhead of getting software out to customers—and it’s the only way organizations can accelerate delivery to meet demand. While this automation drives the modern software factory, it also gives attackers a new way to compromise systems. So is there a way to secure these kinds of automated development workflows? 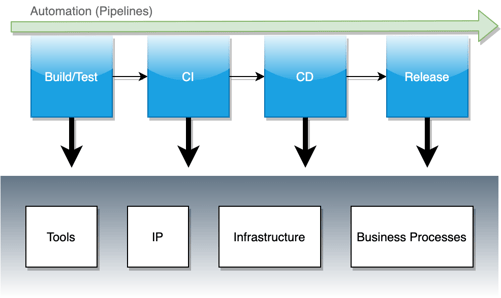 Developers need a way to ensure that the application layer and automation stack doesn’t compromise an organization from the inside out.

To show how easy it is to incorporate application security into the DevOps toolchain, we will deploy Contrast Assess into an existing declarative Jenkins pipeline. This provides the ability to incorporate real-time vulnerability analysis into the automation toolchain without doing much outside the current workflow.

We’ll need some things set up prior to deployment, including the following prerequisites:

The assumption here is that the development team already has pipelines allocated to their respective applications, they are fully functional, and all necessary access has already been handled.

Below is a high-level diagram of how the Contrast platform integrates with Jenkins.

The following demo will walk you through the Contrast/Jenkins joint solution in step-by-step detail.

For the purposes of this demo, we will be using the Contrast Security Community Edition.

Start by logging into the Contrast Security Team Server to get some configuration information. Navigate to the user profile page—click on the top right dropdown and select User settings. Scroll down to the second half of the page where you will see a section labeled Keys. Make sure you have access to the following pieces of information:

You will be updating the Contrast Security plugin configuration within Jenkins with the above information. 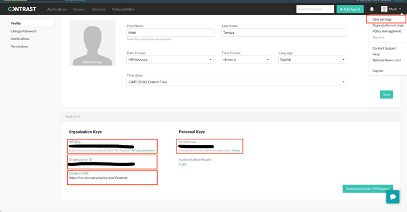 Step #2: Setting up the necessary plugin

The next step is to download the necessary plugin. Navigate to your Jenkins UI and download the latest Contrast Security plugin from the Jenkins marketplace.

Select download now and install after restart from within the Jenkins UI and click import to make the Contrast plugin available to your Jenkins instance.

Now that you have access to the Contrast plugin, configure the plugin using the details from your Contrast Security Team Server (see Step #1) within the Jenkins UI Manage System Configurations view.

Here is a mapping of the required fields:

Make sure you can connect to your Contrast Security Team Server by testing the connection within the Jenkins UI. You will see a success message similar to the one below.

At this point, you’ve successfully connected to the Contrast Security Team Server. Now take a look at how policies fit into the picture.

Step #3: Creating some order with policies

Application policies/rules are a means to map security rules to objects. When the contrastVerification step runs within the pipeline job, vulnerabilities that are found by the agent during the job run will cross-reference these configurations and determine whether a job passes or fails—thereby acting as a gate. For this demo, we will only use the default, out-of-the-box policy/rule configurations.

With Contrast/Jenkins integration, policies are able to be set at various levels, which include:

Having options at these levels is vital to ensure there is consistency across teams and flexibility among managing individual application pipelines.

Below is a sample configuration inside Jenkins for a Contrast Vulnerability Security Control: 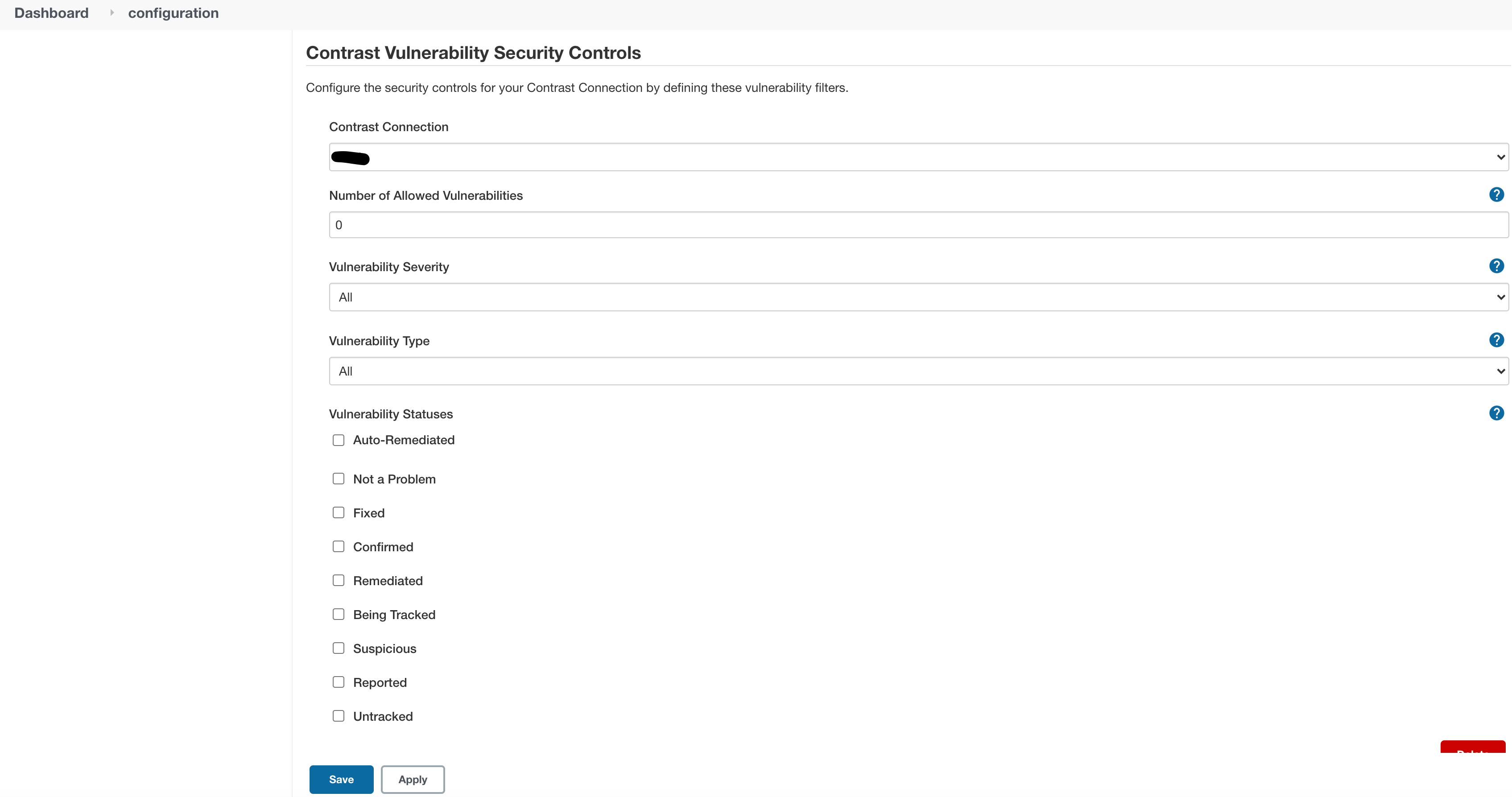 In order to override settings at the job level, you need to update the “Allow job level application vulnerability security controls to override those controls defined here at the system level” configuration under Connection Details. Further reading on the subject is found here.

Now that you’ve connected to the Contrast Security Team Server and taken a look at both system and job-level policies, let’s “bootstrap” an existing pipeline with application security.

Step #4: Getting the pipeline in order

For the purposes of this demo, simply copy and paste declarative pipeline code from this GitHub repository—but you can just as easily create a pipeline job from an existing one via the Jenkins UI.

Start by navigating to the GitHub repository to obtain the pipeline code. It should look like the following: 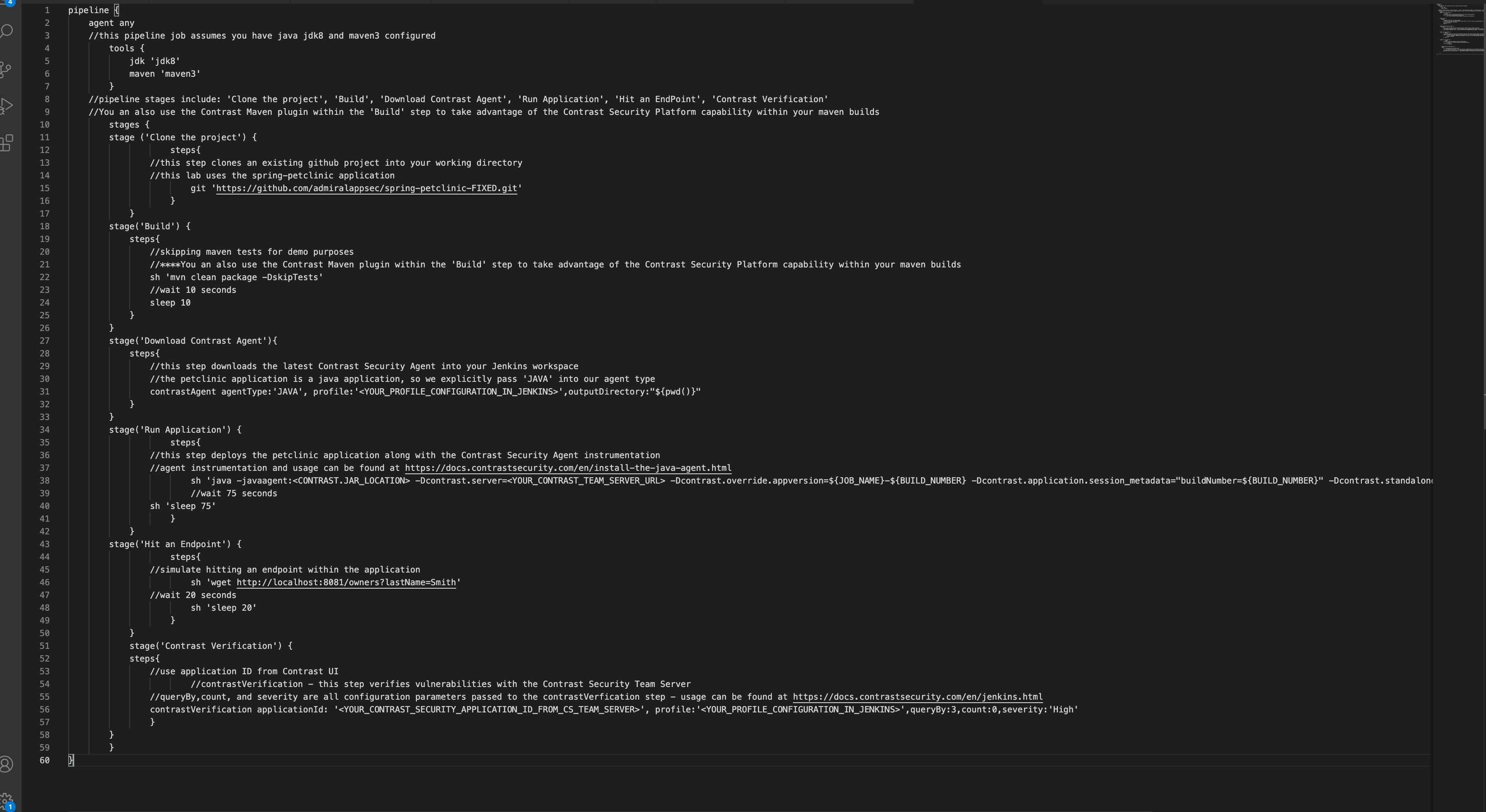 Take note of a couple of Contrast-specific steps within the pipeline:

(NB: In a regular Jenkins freestyle job, this step would be used as a post-build step in the form of a gate.)

In order for the pipeline to run properly, the following information needs to be updated prior to importing into Jenkins:

Now that we’ve gone over the Contrast-specific steps, let’s create a job from our pipeline and give it a go.

Navigate to the bottom section of the job configuration page labeled “Pipeline.”

Copy and paste the pipeline code into the “script” field and click “Save.” 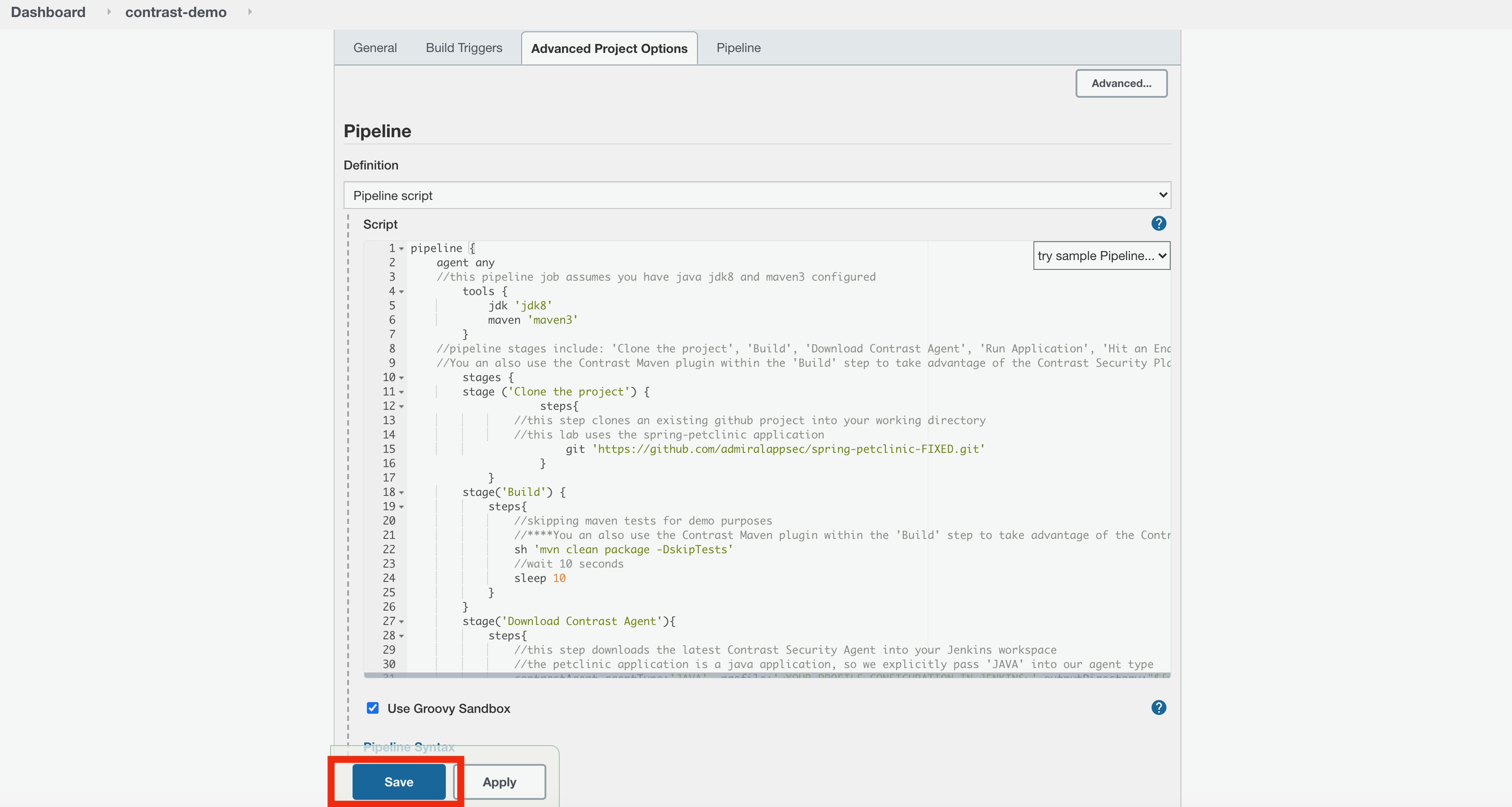 Run the pipeline to see the results by clicking “Build Now.” The pipeline should complete without error. 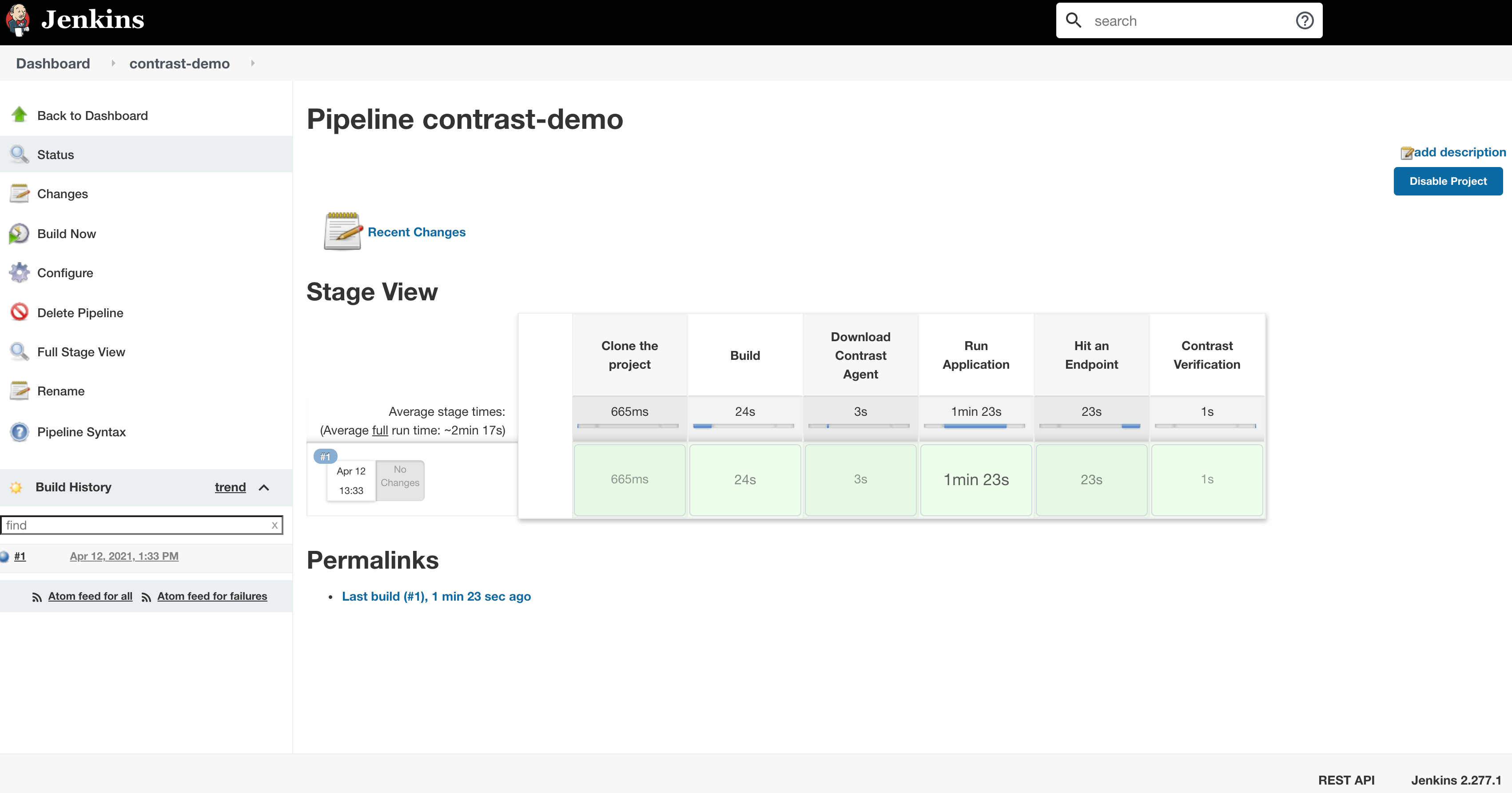 Clicking into the contrastVerification step, you can see it in action. 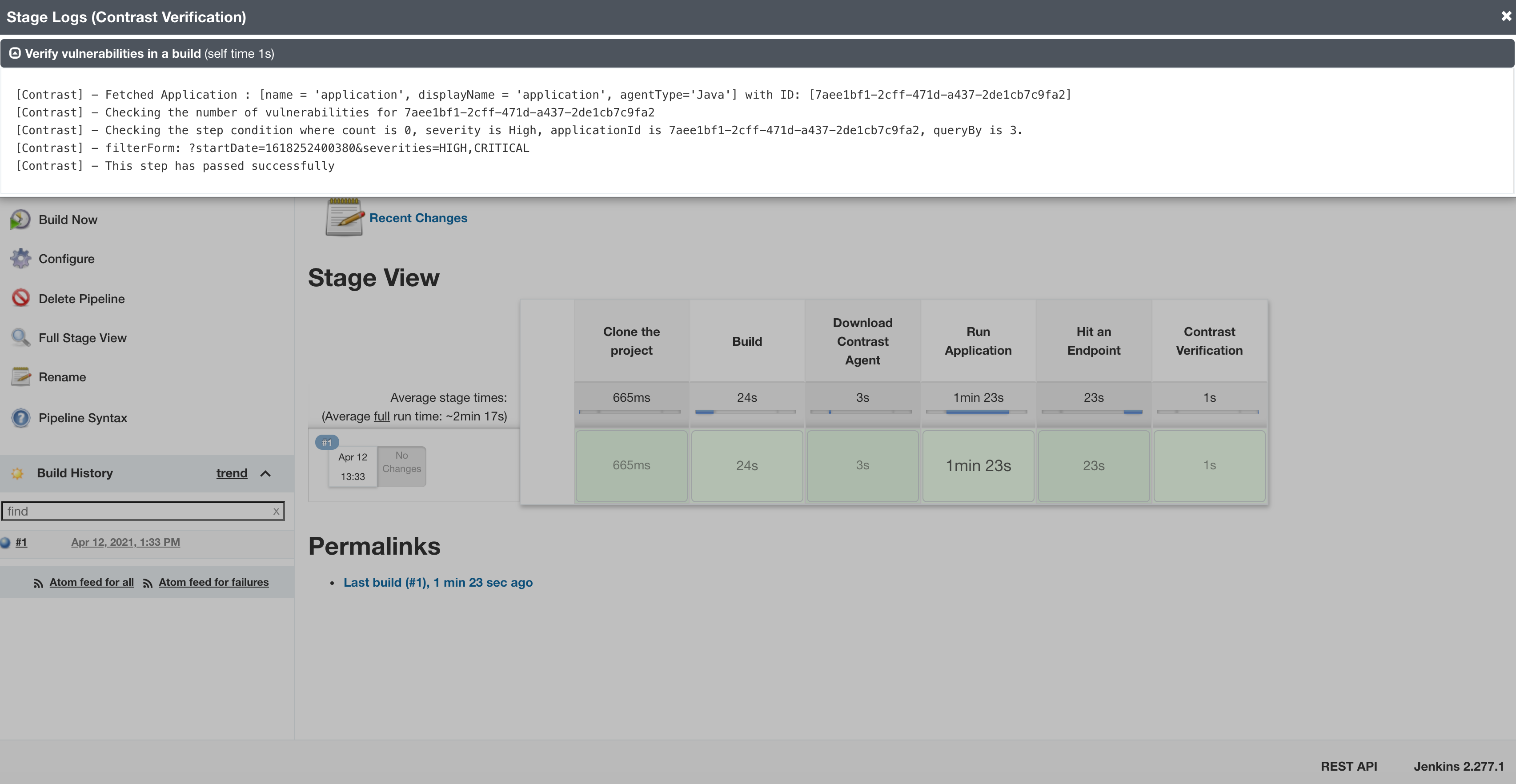 That’s all there is to it.

Incorporating security guardrails across your SDLC processes helps ensure that your application is meeting your organization’s security strategy by giving your teams the flexibility and telemetry they need to deliver software faster and in a more secure fashion. 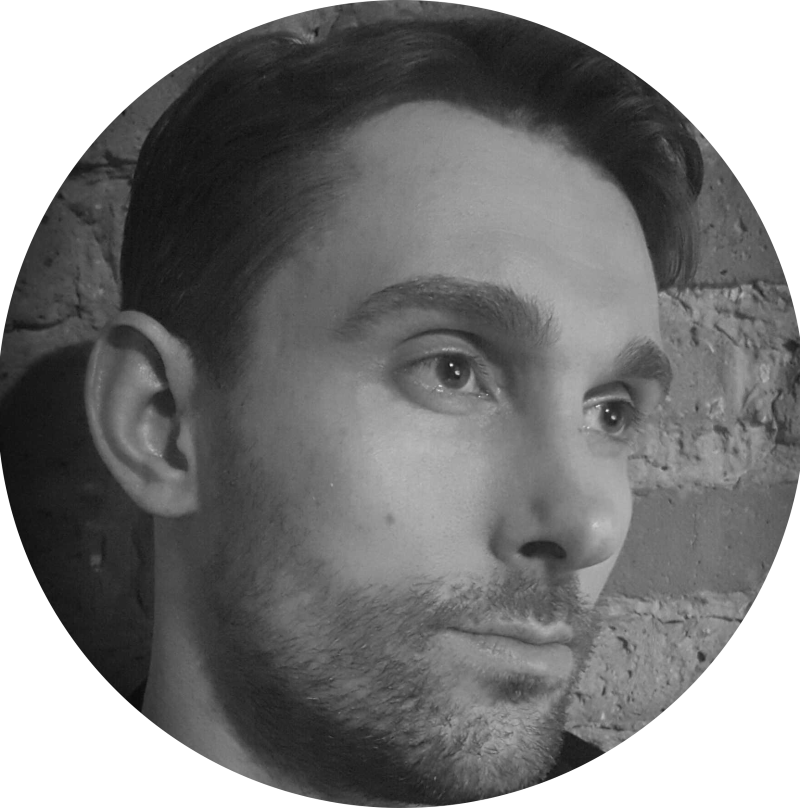 Mark Tomcza is a Sr. Alliance Solutions Architect with Contrast Security and has been in the technology field for over 10 years, predominately focused on modern and future distributed technology implementations. Mark has a background in full stack software development with extensive experience around containers and microservices. He has helped companies all over the world modernize their software delivery and transition into full scale digital transformations.